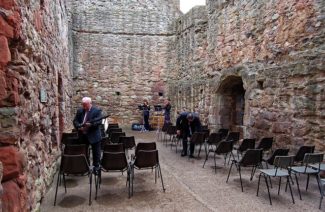 Venues and Their Drawbacks

Andy has played in just about every conceivable venue possible and every place carries its own drawbacks as well as benefits. There isn’t really a perfect venue for a DJ – even some of the best hotels in the area have their own peculiarities which can cause problems.

He came across a new one this past weekend which, although amusing at the time, had its serious side too.

One of the drawbacks with venues such as hotels is that they are often so big they have several function rooms or, as in this case, one very popular function room.

What happens with a hotel like this is that they can hire out a function room for different events on the same day and, if a wedding party isn’t due to arrive until the afternoon, say, then it’s quite possible for some other party to be using the room in the morning. Fair enough, optimising the available space is a necessity these days.

However, it was the circumstances of the “other party” that almost caused a terrible faux pas – and not of Andy’s making but one for which he would have been criticised all the same.

So, Andy went along, as arranged, to a local big hotel on Saturday morning to set up for a wedding disco in the evening.

He has a procedure he follows  for setting up his gear and one of the last things he does is carry out a sound check to make sure he’s happy with every little detail before he leaves.

He was about half-way through his set-up when a member of staff approached him and asked if he would mind if they closed the partition doors (many hotels use this method to split a large hall into two separate venues if numbers don’t warrant the full size hall).

Andy readily agreed but advised the guy that he still had to carry out his sound check so asked how long he had before the other half of the hall was to be in use.

The guy told him, then, as he was walking away, happened to mention it was a funeral party that would be using it.

Andy’s face must have been a picture as the guy asked if there was a problem.

“Not really,” said Andy, “it’s just that I usually use the First Dance song chosen by the couple for my sound check, as it’s the most important song of the evening.”

“The bride and groom tonight have chosen How Do I Live Without You…..”

They both agreed it would be highly inappropriate for a funeral party to arrive to the strains of Leann Rimes’ beautiful ballad, but it just proves a point we see more and more of in our work – how everyone sees the same thing differently and that time and circumstances play a very big part in our perceptions of things. While the wedding party and their guests would be welling up watching the happy couple and listening to this song, the funeral party might well have shed a different kind of tear on hearing this song played just after their morning’s event.

Music has this wonderful, unique effect on us all depending on time and circumstances. Its ability to trigger memories never ceases to amaze us, but it also has the ability, with the same song, to invoke all sorts of emotions.

In our line of work, we usually see only the good side, the happy, lively side. But, we all have to appreciate this effect and, like a sorcerer, be aware of its power to create darker moods at all times